Someone you should thank for your Wi-Fi 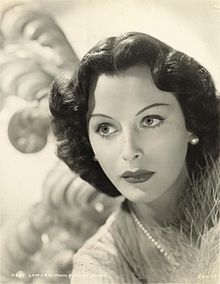 You talk about professional diversity? Today’s Google doodle might make your eyes pop out of their sockets if you haven’t heard of Hedy Lamarr before.
A film actress and inventor? A famous star and scientist?
You drool over bankers turning into writers or doctors doing MBA?
Behold this woman who existed in the pre-World War I period and probably had more oomph and panache than the Kardashians and more grey matter than the scientists of today (no offence to any group of professionals). On one hand, Hedy featured in popular films including a controversial passionate scene in a movie and on the other, bored of her acting pursuits, she dabbled in applied science and came up with spread spectrum and frequency hopping technology to solve the problem of Allied radio communications’ jamming by the Axis. Although her technology was not used until the 1960s, the principles of her work are now incorporated into the modern Wi-Fi, CDMA and Bluetooth technology. And this work of hers led to her being inducted into the National Inventors Hall of Fame in 2014.
From her image being used as CorelDraw software suite’s cover design in 1996 to her autobiography ‘Ecstasy and Me’ courting controversies, her life was something straight out of a bestseller. Sometimes tagged as the most beautiful woman in film and sometimes as the Hollywood star whose invention paved the way for Wi-Fi, she has a unique footprint in the history of the ones who carved their own path.
Talk about eclectic combinations.
Add Hedy Lamarr to the list of incredible women I look up to – check.
Previous Post I want a Smieee!
Next Post Read between the lines