Posted on June 1, 2016January 5, 2020Categories OpinionLeave a comment
~**Spotlight**~
Every so often, we come across events and happenings. Something or the other is always up in Delhi. Meets and fests, weddings and parties, lunches and launches…
Here is a brief account of something that needs to be ‘spotlight’ed. Yes, it is a book launch. Readomaniahas come up with this innovative novel set to grab eyeballs. Every day, we see, hear and read mediapersons on TV, internet and in print. But not every day do we hear the story of a journo. On 17 June, 2016, you will hear one at the launch of :
That’s News to Me!
by Manjula Lal 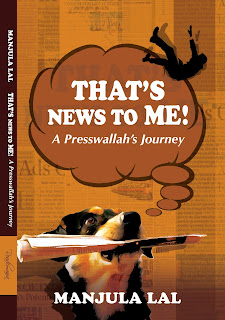 Dogs can be trained to fetch newspapers for their masters. Should a journalist be treated as a retriever of news by his masters? Told with verve and wit, this is the story of Manush, a talented, independent-minded journalist who tries to stick to the core values of his profession while keeping body and soul together. Out in the field, he enjoys the adrenaline rush of getting scoops and the challenge of solving real-life mysteries. Back in the office, he has to tackle toxic bosses who don’t give a toss about talent and are insecure about their own jobs. And at home, there is emotional distress from a marriage only in name. As the action shifts from a magazine in Noida to a newspaper in Delhi to a website in Gurgaon, the world around Manush changes while he continues his dogged pursuit of career goals and fascinating women. Will forces out of his control make him go into a free fall? Will friends and family give him the respect he deserves? Or will he realise redemption lies elsewhere?
About the Author
Manjula Lal currently works as Deputy Editor with Tehelka. In a career spanning 30 years, she has worked for Economic Times, Pioneer, The Times of India, Indian Express and a host of smaller banners.
Born in Ballia, a remote village of Uttar Pradesh where her father was a district magistrate, the author spent 11 years in a convent boarding school in the hill station of Nainital. After attending college in Lucknow and getting her master’s in political science from Jawaharlal Nehru University, she went to Pennsylvania State University as a teaching assistant. Her stint as the first columnist of foreign origin for the local newspaper gave her a taste of celebrity that made her impatient to return to New Delhi and plunge into journalism.
With a ‘punny’ title, That’s News to Me! is all set to hit the stands. Don’t miss it!