Posted on November 15, 2016January 5, 2020Categories OpinionLeave a comment
Author Focus
“Mock, Stalk & Quarrel”
Satire is a kind of poetry in which human vices are reprehended. Or so John Dryden said. What I like best about satire and sarcasm is that they tell the truth, which is why anything even remotely connected to satire piques my interest.
Mock, Stalk & Quarrel, a collection of satirical tales, identifies powerful voices that can wage an ideological war against issues that matter. Twenty-nine voices, indulgent, tolerant, amusing and witty, were chosen to create this collection.
This is the book I am talking about:
https://www.facebook.com/MSQTheBook/ 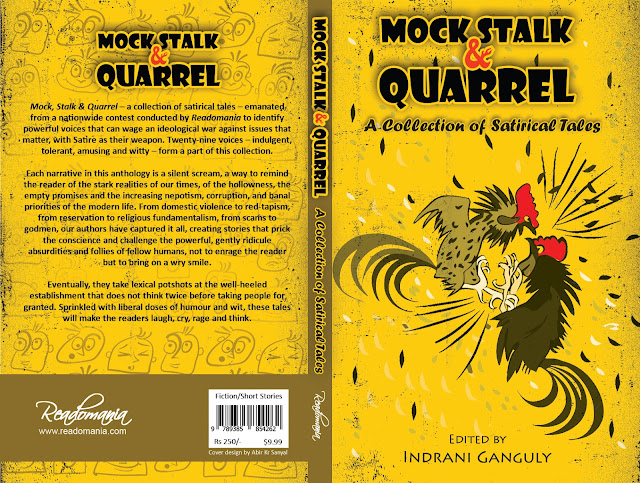 You might not want to miss the launch of this exciting anthology. So, those in Delhi on 25 November, you might want to drop in to the Indian Institute of Foreign Trade, New Delhi for the launch.
https://www.facebook.com/events/1310445652338955/
For those not being able to attend, do not despair! We are organizing a Kolkata launch on 26 November, 2016.
Tête-à-tête with Amrita Mukherjee
Dostoyevsky said, “Sarcasm: the last refuge of modest and chaste-souled people when the privacy of their soul is coarsely and intrusively invaded.”
Let’s hear it from one of the authors of the book- Amrita Mukherjee.
Something about our Author-in-Focus: 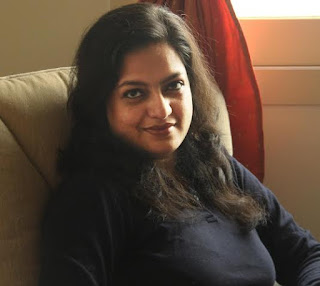 Amrita Mukherjee has worked in publications like The Times of India, The Hindustan Times and The Asian Age in India and she has been the Features Editor with ITP publishing Group, Dubai’s largest magazine publishing house. An advocate of alternative journalism, she is currently a freelance journalist writing for international publications and websites and also blogs at www.amritaspeaks.com. Amrita’s debut novel Exit Interview earned the tag “unputdownable” from reviewers and readers alike.
1.     Please tell us something about yourself.
I am a non-conformist, hyper extrovert and positive person. I take a keen interest in other people’s stories and my friends often joke that you never know when you find yourself in Amrita’s fiction.
2.     When and how did you start writing?
It was a strange juncture in my life. I had lost my brother to cancer, my son was born 20 days later and I had quit my well-paying job after a few months. To grapple with my emotional turmoil I started writing my first book Exit Interview. And my late brother always said I would write one day. It was a way of honouring his memory probably but I hadn’t thought so much then.
3.     Any challenges that you faced while writing?
My son was 10-months-old when I started writing. So the story had to flow between diaper changes, bathing and feeding time. I was gone the moment I heard him cry when I came back I had lost the plot. I had to start all over again.
4.     What do you think about the future of writing/publishing industry in India?
Chetan Bhagat often gets the brickbats because many people claim he’s been selling mediocrity but I feel he was the one who allowed Indian authors to dream and opened up the market for Indian writing. Now publishers are willing to take up manuscripts by Indian authors and with new publishing houses coming up the possibilities are increasing. I particularly think Readomania being a comparatively new publishing house is bringing out phenomenally good books and these are the kind of books which you would want to keep in your bookcase and read again and again.
5.     What do you think is the need for satire in today’s time?
The times we live in we need satire to keep our sanity. We live in such insecure times that we really don’t know what’s going to happen tomorrow and hit us like a bolt-from-the blue. Did any of us think that one fine day at 8pm our Rs 500 notes would become defunct? I guess that’s when you need satire to look at a serious situation with a tinge of humour and survive through the process.
6.     What do you think are the easiest and the hardest thing about writing short stories?
If you have the story figured out you can actually finish it in two days but you haven’t then God help you. You might keep struggling with it for months and still not get it.
7.     Any writing rules/rituals?
I try to create a structure in my notebook or in my mind before I start writing. I also keep notes sometimes of incidents, happenings, research that I would want to include in my future stories.
8.     Tell us something about your story in MSQ. How did it come about?
I was working with Dipankar Mukherjee, the owner of Readomania for my next book. He told me this competition Mocktales is on and asked me to send a story. I had never written on a theme so I wasn’t sure how I would fare. But an incident had happened in Kolkata around a woman in shorts when this idea came to my mind. My story is named The Dress Code.
9.     Tell us about your previous work.
By God’s grace my debut novel Exit Interviewpublished by Rupa Publications in June 2015 was well received and critics and readers said it is “unputdownable”.  It was on the Starmark Bestsellers List for months and did well in Dubai as well, where I lived as an expat. The book is based on the life of a woman journalist who moves through the ups and downs in her life as she travels from Kolkata to Dubai to Egypt.
10.What is your current project or your next release?
My next release is a collection of short stories published by Readomania.
11. Trivia:
·
Favourite food: Crabs
·        Fave books and authors: Keeps changing but Chander Pahar and Hungry Tide are my all-time faves. I love Ruskin Bond, O’Henry and Jeffrey Archer.
·        What makes you happy? A hug from my son.
·        What gets you angry? Disrespect.
·        Your best piece of work till now…I guess yet to come.
12. How do we connect with you?
Blog/Website: www.amritaspeaks.com
Facebook: https://www.facebook.com/Amritaspeaks/
Twitter: @amritamuk
13. Any message for the readers?
It is wonderful people still read despite such busy and stressful lives that we all live in. And I would want to thank my readers for all their appreciation for my blogs and my first book that enthused me to keep writing.
Previous Post Beat On...
Next Post Granny and Europe